A stroke of luck

We got coverage in current issue of THE WEEK magazine and I was delighted and surprised to see my picture on the cover - Here is the cover and the link to the cover story on various people who have made a dramatic career switch.

Posted by Rahul Verghese at 15:02 No comments:

The most beautiful marathon in the world - an ultra actually 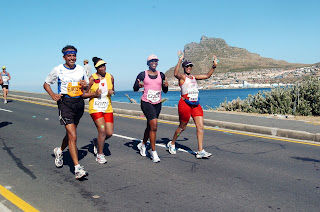 A marathon is a humbling experience, especially for a non athlete like myself. Yesterday was no different as I realized how asymmetrical I was with the left leg shorter than the other by 1.5cm and stuffed with an extra insole, my right foot over-pronating (or rolling inwards) more than my left, and both being as flat footed as they come. The 2 Ocean Marathon 56km Ultra Marathon here in CapeTown, S Africa was humbling in more ways than one. Seeing 6500 people at the start line of this incredible distance, the spectacular views of the Indian, and Atlantic oceans from sea level and from cliffs, seeing Table mountain loom over the area around Cape Town, and see the thousands of people both volunteering and lining the streets as spectators, to cheer, was energizing, all along the 56km ultra marathon distance.
The weather was just right, I had made some acquaintances at the 5km International Friendship run the previous morning where I ran with the Indian flag, being one of 2 Indians who had registered for the ultra- unfortunately did not get to meet the other, and hope he or she did come and run.  6500 pairs of feet pounded away in the dark (13000 had started the half marathon 25 minutes earlier), including those of a one legged runner whom I ran with for a while; very inspiring. 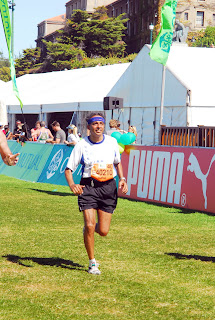 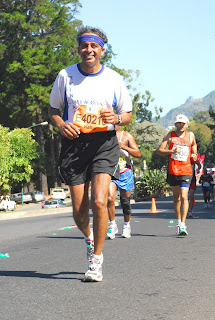 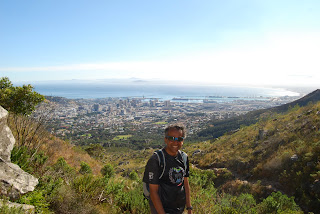 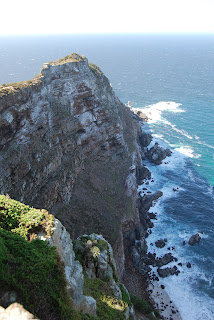 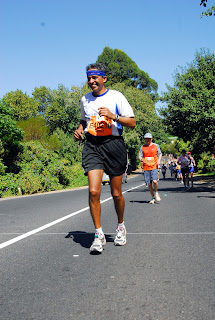 The only other place where I had the chance to be similarly inspired was at the Rio De Janeiro marathon some years ago.
White clouds like a tablecloth on top of Silvermine mountain, was a pretty sight as we carried onwards and reached the Indian Ocean at Muizenberg around the 15km point. The blue waters were as scenic as they come, as we traversed across to Kalk Bay and the town of Fish Hoek a bit of sweat now pouring down our faces as it started getting a bit warmer but drying off fast with the light breeze. Then came the few kilometers going across towards the base of Chapman drive and the Atlantic waters. Chapman drive has been closed to vehicular traffic for a bit, due to rock falls and land slip danger.
The views were breathtaking, but so was the climb – had to do a brisk walk most of the way up to conserve energy as we had just about crossed the half way mark at 3 hrs and a minute and the climbs were only just beginning.
2 Oceans had really only just begun!! I ran with Justice from a local club and I told him that he should power on – ‘else Justice delayed would be Justice denied’. Well I don’t know about him but I felt the puns lighten my load and add a bit of spring to my stride, as I stopped at water points to take pix of people, the views and to cheer folks on. I told Moses to part the waters so that I could take a short cut across 2 spurs along the bay, and so on…
I was enjoying myself as we crossed the high point on Chapman’s drive 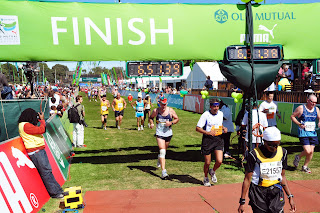 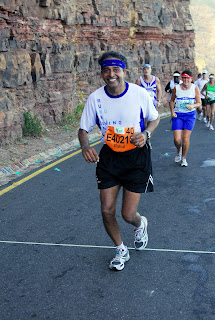 and began the steady descent towards Hout Bay. The dreaded climb was over and behind us but my overall pace was reducing significantly as I crossed the full marathon point at 42.2km. Now there was a different challenge as the 1000+ of us stragglers were being cheered on and encouraged to finish within the 7 hr cut off, else no certificate, no medal and perhaps no finish at all. That prospect was scary – I had not toiled like crazy, missed my elder daughter’s 16th birthday, braved all odds to land up in Cape Town and run past Chapman’s Peak to end with a ‘Did Not Finish’ against my name. 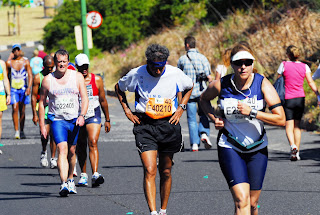 AND the toughest part –


the scenic but way tougher climb up Constantia Neck was yet to come. .
Brisk walking at 6kmph was all I could manage going up the 3 odd kilometers of the climb – it was a bit steep, and the treadmill running on an incline of 5% did not train me enough for this one. So the walking continued, as we passed through ever scenic wooded areas and banking roadways. ‘Come on, you guys are looking great and will surely make it within the time’ cheered on the spectators lining the road, but the nervousness was palpable as some fell behind, and a couple broke down and sobbed. I saw a few socks ahead of me bloodied and I was glad to see myself in good shape despite the extra insole in my left shoe. 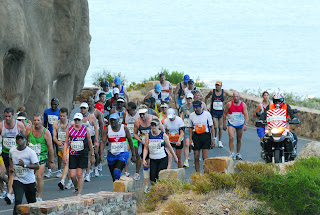 Constantia neck was finally crossed and a few folks had dropped out with cramps – I did not have any signs of cramping but, you could never say never with cramps – docs still cant really assign a specific cause – could be too much water, or too little, a bit too much of exertion, not enough flexibility and stretch in the muscle and…..
I banished the though and then with 3kms to go, had some volunteers take my snap next to a sign which said – ‘So beautiful, It hurts!’
Now I wasn’t sure how much time was left because it had taken about 3-4 minutes for me to reach the start line in the morning, post the gun going off, so I had around 25mins to do the last 3km, so I had to run and couldn’t just walk. So run I did, and finally reached the finish line, in the fashionable Newlands area, outside the Institute of Sports Medicine, at 6:51 according to the clock. I had made it and had received another medal – my 29th, and this one got me to the 6th Continent. I had been humbled again.
I wait for the day when there will be 500 Indians crossing the finish line of this lovely and gruelling run, with many more running 5km distances in our country as a matter of routine, getting us to be a healthier, more community minded and a more optimistic society, saying in each heart – I can!!
But I know if I at 48, with the recent knowledge that one leg is shorter than the other, overpronating like crazy and more.. can get hooked and enjoy the highs of life, anyone can.
Rahul S Verghese

The most beautiful marathon in the world

Posted by Rahul Verghese at 21:19 No comments: