Run with a smile and light up another

The Mumbai Marathon is always special for me. 2004 was my first marathon in India and 2016 my most recent with the numbers of marathon finishers climbing from 300 to 3400 - way to go!

This time around I was keen to finish in a better time than usual and was getting back into shape after the tough (hot and humid) Singapore Marathon in early December. I did a few semi long runs in between but the Delhi smog got the better of me and I did shorter but faster runs on my treadmill.

Two weeks before the run my warm up started :-) My stomach started running (and weakened me just as I contemplated my long run) and then a few days later my nose started running!! 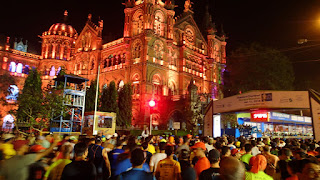 Reached Mumbai and then my stomach decided to go for a long run again before my legs did and I lost my voice.. That's when I decided my goal - run with different pacing groups, meet old friends and make some new acquaintances along the 42.2k, and soak in the atmosphere.

On race day my camera was charged and so was I. I erased all the issues of weakness and hopeless preparedness and also focused on being sensible and listening to my body and going with the flow.

Met up with Guruchandran early on and we decided to run together and then through the darkness till Peddar road went on and off with the 4:30 pacing group. Met Jerry John at Peddar road - my IIM Batchmate - who is religously there at Prabhu Kunj every year. Took a blurred selfie with him in the darkness and carried on. 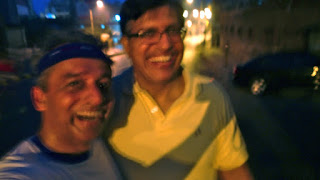 We got onto Worli sea face soon and the beginnings of the sea link as we saw the sun come out. 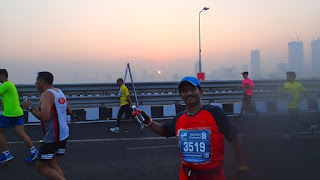 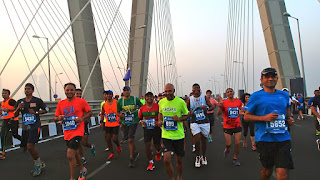 Then the 4-5km of the sea link where the 4:45 bus with Nikhil Shah caught up with us and we took some pics 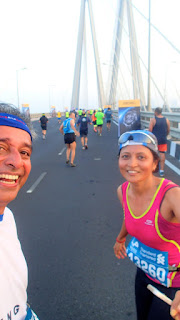 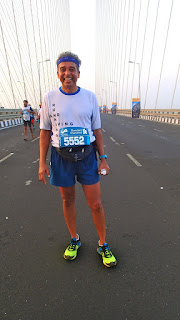 Met Kiranmai from Hyderabad along the way and took more selfies.
By now I realised I was a lot weaker than what I wanted to be so early into the run so I added in some more walking breaks and as we passed the Half Marathon mark and started heading towards Dadar, the 5 hour bus caught up with us.

All along, the way it was greatly energising to be greeted by and yell out to acquaintances and friends and strangers from over the years and spur each other on with a smile and a shout. In the long Worli Loop I saw the 5:45 bus entering the loop which we were leaving and I jumped over the divider to take a click with Dinesh Laungani and his bus. and then Himanshu and his 5 hr bus caught up with us. 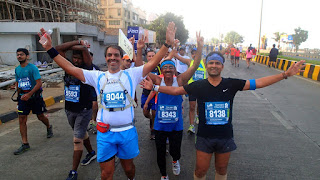 Then Guru and I were taking shorter but more frequent walking breaks as we kept working on the next target - that traffic light, or that billboard, or that bus stop, and we kept pushing each other on, as well as a few others who would join us from time to time.

Then back to Jerry on Peddar road - this time in the sun with a much sharper image. 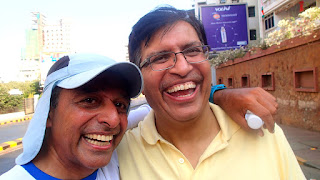 And then by the time we reached Chowpati - we bumped into Devander from Bangalore and Nandita from Kolkatta and formed yet another group, this time to the finish line. 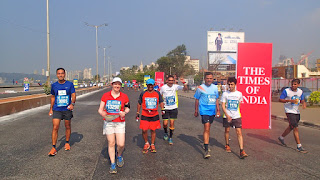 And we sprinted the last 200m to the finish line, big smiles, and better friends at the end of it.

And then rushed to Leopolds to hydrate :-) :-) of course only after some sensible ingestion of the sandwich and milk and a rub down at the Volini recovery tent. Was great to see and meet so many folks - a dentists delight as everyone was smiling and laughing with their teeth glistening :-) 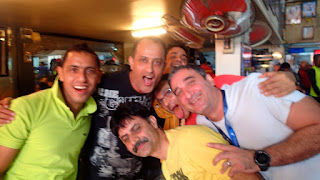 Leopolds was as usual boisterous and loud with runners from all over the country celebrating there - all of us were 5 year olds again. 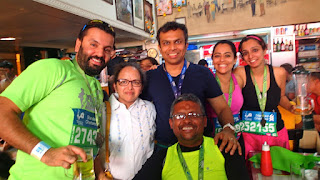 Cheers to that and Mumbai - see you next year again