Running into the mist

Yesterday we did our last long run as prep for the half marathon on the just announced route of the Delhi Half Marathon. We had around 150 enthu runners land up at Nehru Stadium starting at 545am for a 630 am start. Just as the last couple of cars rolled into the parking lot, so did a bit of mist. We started at 630 sharp - on time, like runners always do, and just as we hit Lodi road, the mist swirled around thick. 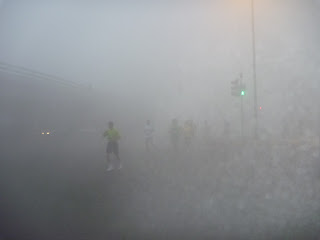 Looking across the road for the meteorological office was a stretch - but then we saw the display Weather forecast N/A, Humidity N/A, Temperature N/A- we knew we had reached the right spot for the first U turn!! By the time we reached the Mathura road crossing the mist was so thick that a lot of us including myself took the wrong turn, got totally disoriented, and ended up running a few kms off the route.

It was romantic, super weather, but also had to be extra careful while crossing the road with the odd few vehicles on the road.
We meandered around a bit and then finally got on to Mathura road and then turned to Subrmania Bharti road and then Zakir Hussain road to India Gate. 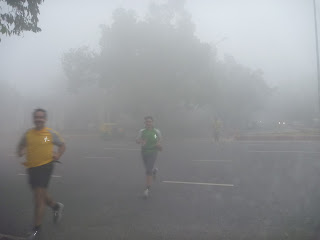 India Gate in the thick mist is something I have never seen through my many decades in Delhi and that was awesome. Running on the red gravel sidewalks along Rajpath felt like home since I have run here for years and years given my folks stay on Ferozshah road. Then all of a sudden, in the fog, I missed the Rafi Marg crossing and realised that only when many of us saw the Vijay chowk lights closer than what they should have been. We did  U from here - not going on to Rafi Marg and Parliament Street to the Tolstoy Marg U turn point ( which we would be doing on the 27th) and did not take the Janpath left turn and loop around the Meridien Hotel either.

We hit India gate soon enough and then again to get to Zakir Hussain Road, went off a wrong radial and found ourselves next to the National Stadium. So here I was - a true blue DilliWallah and a person who has grown up and run here several years, getting lost yet again. But the extra distance did not matter, the pace was better than expected and the weather was superlative. 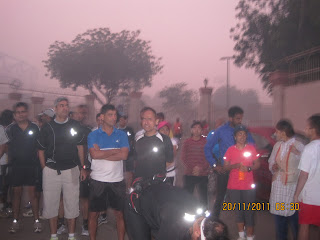 Soon we were on our way back and headed to the Nehru stadium and THEN, yet again, I almost took the turn before I needed to, to get to the finish point. I know there will be no issue of getting lost on race day thanks to the barricades and volunteers and police and a  few Delhi spectators along the way, but the flag off may just be to a On your marks. Get set. Get Lost!! Which would be a little different. 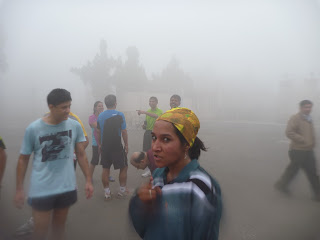 When we reached back we realised that many of the sub groups of runners had also lost their way a bit, here and there. The fog was not as thick as when we were running but it was reasonable, nonetheless - but what the heck it was phototime. All of us posed and looked our best, hoping that something would be visible - much like the emperors new clothes.
To see some more snaps check out http://www.facebook.com/RunningAndLiving

Running in the mist in Delhi can be real fun - and it looks like that's what all of us running in the Delhi Half Marathon on Nov 27th - need to probably gear up for. Else you may just say - heck! I mist this run!!
Posted by Rahul Verghese at 19:06 No comments:

Come on and run outdoors once in a while at least, and get a good dose of Vit D and get stronger bones too.
Finally a study in India which shows some India specific data too - which was known for over a decade elsewhere.
So no that the data's out - one more excuse has fallen - so......
Let's run http://articles.timesofindia.indiatimes.com/2011-10-20/delhi/30302538_1_bone-loss-weak-bones-bone-strength

Posted by Rahul Verghese at 10:31 No comments:

There were 500 kids who ran today with 500 partners - making this the first time I was participating in a race of this kind - as a volunteer. George Abraham - who has done a lot of work in the field with visually impaired folks, who I am proud to say is my cousin, flagged off the run for the visually impaired.

I was at Brar Square at the Delhi Cantonment at 645 am this morning helping my friend Inder Dutt Salwan whose brainshild this Salwan School Marathon is. They now get 40000 kids to participate in a variety of runs. We were hearalding the kids into the corrals for the different races. Seeing the thousands streaming into their enclosures was quite an energising experience. There was excitement in the air, and that kept me busy till 845am.

That's when I found myself with Subal, at the start of the 3.5km run for the visually impaired. There were around 100 people who have run with us at Running and Living who were volunteering - Prem and Parvinder and Sushil and gang from Delhi, Ellen and her family from Denmark, Ajay and Harshita and several others form Gurgaon, Reyhan from S Delhi Polytechnic, Rishi, Nikhilesh, Sanjeev and so many others. That made it a party on the cross country track.

I had a blast with Subal - cheering, clapping, chatting - I gave him a commentary of what all we were passing in this army equestrian ground. This snap above is Subal and me somewhere around the 2.5km mark. And I have to marvel at all the visually impaired kids who ran like they were born to run. Its a little uneven here, stones on the ground her, a dusty slope down and then up  and now its a brick laid track ---- the sun has come out and it is really looking beautiful - and he kept running along with my gentle tugs and commentary never missing a step. In fact just as I was getting ready to click a snap I had a tumble and jokingly thanked Subal for holding my hand.

All of us at the finish line were humbled in many ways, and delighted that we had made it out this morning. The 4 legged race was a great success. Check out the video on the left of this blog.

Posted by Rahul Verghese at 12:34 No comments:

Running and Living into friendship

Had a phenomenal run today. We organised a 5k, 10k and 15k run as a precursor to ADHM - Airtel's biggest celebration of friendship. 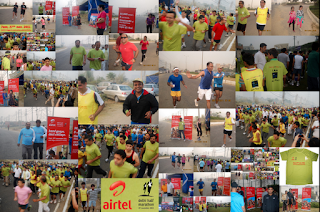 Gurgaon was rocking as 500 people ran and 300 of the 'early birds'  got a great running T shirt.

The HUDA administrator, 2 councilors and a ton of corporates, villagers and others ran and mixed around with each other, then painted, planted saplings and had a blast post and before refreshments.

Posted by Rahul Verghese at 22:45 No comments:

An article in the Economic Times Today outlining how running is picking up in the Corporate world across India be it in the board rooms, as a stress buster, as an unleasher of individual potential, and most importantly, as a potent marketing platform.

Enjoy the run, because it makes business sense!

Posted by Rahul Verghese at 11:30 No comments: