I was spouting all the Do's and Dont's to several eager 1st time marathoners and half marathoners at Mumbai at the expo, on facebook and more, and was the pacesetter for the 5:30 bus for the marathon. This was nothing new to me as this was going to be my 8th Mumbai Marathon and my 45th. 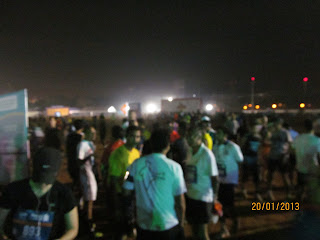 But I was queasy and somewhat nervous inside as I had not been able to train since Oct 9th when I pulled my back and then on and off there were a variety of reasons with our frequent weekend running events that I had not even been able to run. So with around 5-7 runs since Oct 9th and 2 runs of around 10K in Gurgaon, I was here in Mumbai. I was also meeting up with many friends - so late night, beer and all that stuff was adding up on all the don'ts before a marathon and standing on my feet on Sat at the race pack pick up from 10am-4pm with a late late lunch wasn't smart either.

I did the next best thing - erased the memory of what I should not have done and in the last week - walked a bit in the warm Mumbai sun to get used to the 11am heat, drank loads of tender coconut water (my all time favourite hydration and health drink) and focused on mental prep and the strategy for the pacing: 7mins per km pace with 30 steps walk per km, and 15 sec stop per water point - 5:30  meant 330 mins 7x42 was 294 mins, 30 steps x 42 - 21 mins, 15 secs at the 20 water stops - another 5 mins and we had another 10 minutes plus some bonus in the bag for Peddar road walk up, Chowpati heat and a bit more of walking in the last 4 k.

The heady atmosphere at the maidan at 445am added loads of energy, cheering, nervous confidence, smiles, meeting loads of first timers and others was great, as I set the Runkeeper app on my phone to keep me and the bunch on track.

We crossed the start line at 5:48am and the bus was on a roll. I had to make sure I did not cramp - so I was carrying my 'magic potion' of a double shot of Gatorade mixed with rock salt and Tang, packs of Glucose biscuits, additional rock salt for the passengers on my bus, the pacer flag and a camera and my mobile phone plus some emergency money for tender coconut if required.

Bijay Nair was our tour guide as he pointed out a few of the Mumbai landmarks as we crossed them. At the 4km mark we were managing a 6:45 minutes per km pace, going strong and had done our first round of introductions of name, city and how many marathons each had done - so many first timers, and I almost felt guilty for not training appropriately, but then I banished that thought and focused on the positives. The energy was great at we walked up the Kemps Corner Flyover and jogged down to Mahalaxmi. We had our first round of salt licks as I passed around the rock salt pouch and we put a bit on various palms, had some glucose biscuits and a shot of water. Many had brought along a bit of salt too - Great bonding in it's own way - getting people to chat with each other, loosen up, realise that there were so many of us 1st time marathoners, and then KP Suresh from Bangalore was leading the singing with "We shall overcome" and then getting onto more, and we had a runner from Pune who joined us later with great songs and musical instrument accompaniments to the singing. Saw SCMM hoardings where Bijesh and Ankush were the heroes of the photograph from our 5:30 bus last year. I tried to get money from the bus passengers if they wanted their photo on next years' SCMM photo - but I was unfortunately not successful.

We started crossing the half marathoners going the other way and we cheered them on and got cheered in return. Saw many friends and acquaintances cross us and took snaps at a couple of locations, gingerly getting my camera out of my water proof waist pouch and its plastic wrapping, each time. 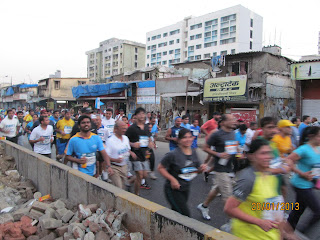 We got onto Worli Sea Face and the sight of the water was calming. A few kms later was the start of the sea link. It reminded me of the Verrazano Narrows Bridge at the start of the New York City Marathon. This was now as crowded with the sea of humanity and was also longer. Here's where the singing got louder, and we took many photographs and we got clicked by several sharp shooters who were lying on the bridge, standing on the sides and more. That was a fun 6km stretch. 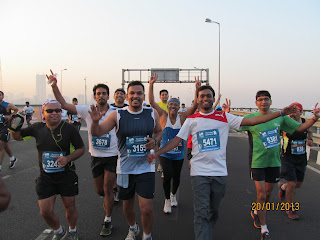 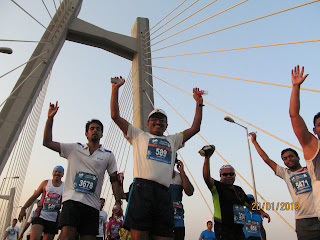 We did another round of introductions as some had hopped off our bus to run faster and some had hopped on to the other two 5:30 buses who had different pacing strategies - all to come in at 5:30 in the end. Bandra reclamation was crossed, cheering crowds resumed, then the energy stations began from Mahim Causeway - little kids by the side of the road with hands outstretched for 'High Fives'. It's at times like this that I have always found my camera to be useful. "If you cheer loudly I'll take a snaps of you guys" I would yell, and there would be an immediate roar, smiles and we would get a huge amount of energy from them. And so we continued down many other 'energy stations' along Dadar and Worli. Back into Worli again and along the sea face again. We were now running 500 m with a 20 step walking break. The mood was still great and the atmosphere still electric as we were able to joke a bit and sing even louder and more raucously. At the 31km mark we were very comfortable on timing and it is here that I told the bus passengers to go ahead of the bus or just keep on at this pace, if they wanted to finish in a time better than 5:30, as the bus would be slowing down now. Some who were feeling strong, did, and we roped in a few more passengers along the way as we shouted 5:30! 5:30!!

Race Course and then Haji Ali were great sights to see, especially since we were now MBA's (ie we had Minutes in our Bank Account). Photo ops at 33kms and 34 kms followed. It is here that the passengers were told that if we walked really briskly to the finish, we would just about hit 5:30 so the relief among the first timers was palpable. Peddar Road is Party Place Location and here we ate and drank and took loads of snaps as we walked up and did a few short jogs along the flat stretches. 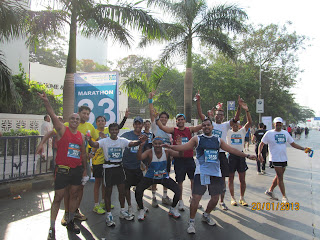 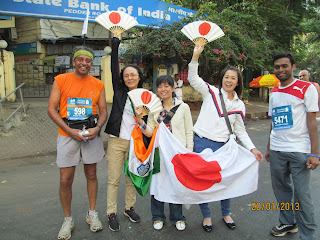 Coming down the Kemps Corner Flyover I got a call from Bhavna - a batchmate from IIM who was somewhere near Babulnath. By that time I had just bumped into Sreenivas, another batchmate, and a fellow Lever's Management Trainee. We had a quick reunion snap with Bhavna at Chowpati and then we were on a roll. Again told folks who were feeling strong to keep running and do better than 5:30 if they wanted to, and we picked up more passengers from Marine drive.

We saw the Dream runners or rather dream walkers on their march, as we jogged and walked onwards. Churchgate reached, with a few new passengers, we now focused on the end plan. That's when I told them that we will run and walk 300 m at a time and when we see the 500m to go sign we would start jogging, at 300 m we would step up the pace by 10%, and at 200 m by 20% and do a flat out sprint at 100m to finish on a high and with a bug grin and hopefully with some nice finish snaps. 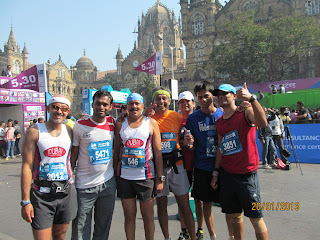 It was a blast in Mumbai! and then with a run down to Leopold's to round off that wonderful experience - because the traffic cops had said - drinking only after driving - so thats when this bus driver quenched his thirst.

Congratulations to all of the 3500 odd who completed the marathon and the several others who did their half marathon. Congratulations to all the first time marathoners and half marathoners - you are now addicted to running!!
Thanks to ALL the folks who boarded our bus at various times and brought up the energy, and to all the kids to were our energy station and to all the residents of Mumbai on teh streets that day who raucously or silently cheered us, and to all the cops and volunteers and medical stations and organisers  - Thanks for doing what you did, and making each one of us feel like a champ.

Look forward to running into you soon in one of our runs - maybe at Corbett, or Alibag or the Himalayas or in one of the 10 States across the country where we have started organising runs.